Riots of Passage by Jason McGathey 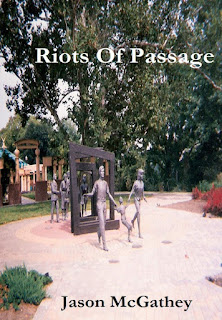 In this highly anticipated follow-up to his memoir "One Hundred Virgins," the author continues to document in riotous fashion life on a major college campus, in a major U.S. city. Though specifically Ohio State University and Columbus, Ohio, in a sense the particulars don't matter because such experiences, though often outrageous, are universal ones.
Joined by his familiar cast of fellow reprobates, along with a healthy crop of fresh recruits, this crew closes out their final year exploring campus. If the first six months were centered around discovery, then this epoch finds them operating under the banner of refinement and expansion. As always, the journey is nothing if not wildly unpredictable, and a continual reminder that it's often best to just start running, with no end goal in sight.
"If I had to describe how any of us, and certainly yours truly, ever manages to accomplish anything," McGathey observes in these passages, "I would say it runs something like this: we start down a hallway toward the object of our desire at the other end, but a rug is pulled out from under us, just about on a daily basis, before we get anywhere near it. Yet every so often, after landing on the floor, you happen to spot this secret passage in the wall that you never would have noticed otherwise. Certainly not by remaining back on the starting block. And this passage commonly leads to something as good as or even better than what you originally mapped." 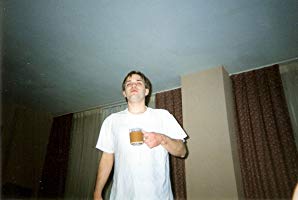 The writing bug seized me at an early age and basically never let go. My goal is to write something every day, although usually, in truth, it's not even something I have to think about. So I'm easily working on stuff at least 350 days a year.
Incidentally I think the modern scholastic experience tends to make people NOT want to write and NOT interested in books. That many of us have managed to like this stuff anyway seems some sort of miracle, and was probably instilled before the system really got a hold of us, or something we stumbled onto much later. So I feel lucky to have discovered something I still really like to do, the only thing I've ever really had much interest in doing for a "job." To date I have published 5 books, which is kind of distressing, that the total is still so low, despite working on this stuff basically non-stop. But I do also maintain a couple different blogs, and have contributed to both online and print publications, in a wide variety of subject matter and styles, so this stuff does keep me busy and anything but bored.
The first time I wrote anything significant was the last day of my 11th grade year, when I came home and jotted down everything that had recently happened. This was the moment a switch flipped, where all of the talk about "someone should write this stuff down!" meaning the daily exploits of my friends and me, hilarious ideas we came up with, conversations had, and so forth, where that turned into the sudden realization that...wait a second, there is no "we" here. Writing, for the most part, is not a team sport. If you ever find yourself saying "someone should" write this all down, that someone is probably going to wind up being you.


This book is FREE on KindleUnlimited right now. https://www.amazon.com/Riots-Passage-Jason-McGathey-ebook/dp/B082HZJPG5/ref=tmm_kin_swatch_0?_encoding=UTF8&qid=1578235727&sr=8-1

I will warn you it is a very long book. 618 pages so be prepared for a long read. Should you have the time to read it please leave a review on Amazon.
Posted by Mary Jackson at 6:13 AM