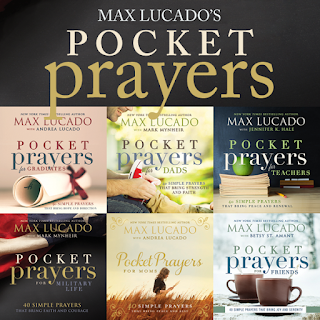 Some friends are closer than family. They weave their way into our lives, there to celebrate the highs and comfort us through the lows. And for those special friends, Max Lucado offers forty scriptures and guided prayers that bring joy and serenity in Pocket Prayers for Friends

All the way from coloring inside the lines to calculus, teachers have given us the tools to thrive. Where would we be without them? But a teacher’s job is often a difficult one. Sometimes anxiety and exhaustion become the norm. For those in need of a little peace and renewal, Max Lucado points to the Teacher who offered just that. Pocket Prayers for Teachers contains forty scriptures and guided prayers written especially for those special people, who encourage and inspire our students.

Dads wear many hats. From protector to playmate, confidante to counselor. No matter the role, families rely on dads to lead with strength and faith. And in Pocket Prayers for Dads, Max Lucado offers forty scriptures and guided prayers that will help dads do just that.

No one knows how quickly the chaos of daily life can become overwhelming more than moms. We lean on them for everything from hurt feelings to missing homework to broken bones. So, where can moms turn for peace and rest in the midst of mayhem? Bestselling author Max Lucado points to the Source of all hope and strength in Pocket Prayers for Moms, which contains forty scriptures and guided prayers written especially for all moms.

Graduation is one of life’s most exciting milestones. It can also be a source of uncertainty and anxiety. What comes after graduation day? More education? A career? Starting a family? Often this time in life can bring more questions than answers, but Max Lucado offers hope and direction by pointing to the Answer to all of life’s question. Pocket Prayers for Graduates includes forty scriptures and guided prayers written especially for those considering their futures post-graduation.

Daily life for those in the military and their loved ones at home can be filled with rapid change, fear, and uncertainty. For those bravely sacrificing for our country, bestselling author, Max Lucado, offers words of hope, pointing them to the Source of faith and courage. Pocket Prayers for the Military contains forty scriptures and guided prayers that will help readers face the unique challenges of military life with courage and faith.

Pick up your copies here...
http://www.amazon.com/s/ref=nb_sb_ss_i_1_14?url=search-alias%3Daps&field-keywords=pocket+prayers+max+lucado&sprefix=Pocket+prayers%2Caps%2C283 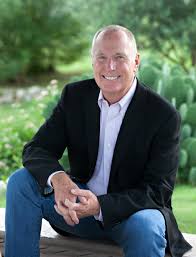 In just under two decades of writing, Max Lucado has accomplished more than most writers hope for in a lifetime. Most of his books have appeared on one or more best seller lists, including those published by the "New York Times," "USA Today," "Publishers Weekly," and the Christian Booksellers Association (CBA). Aside from hardcover books, Lucado's writings have also been published as children's books, videos, CD-ROMs, DVDs, music CDs, mass paperback booklets, apparel, giftware, bookmarks, calendars, study Bibles, workbooks, curricula, and plush products. In spring 2003, Hallmark/Dayspring Cards launched a new gift card line featuring excerpts from Lucado's writings--and has already sold more than one million cards. All this success has drawn more than a little attention to a previously low-profile Texas author and minister. Lucado has been featured in a wide range of media, including "USA Today," "Larry King Live," and "NBC Nightly News." He has spoken at the National Prayer Breakfast before the President of the United States. He has traveled with internationally renowned musicians as a special speaker on their music tours, such as the highly successful "Come Together & Worship Tour" (sponsored by Chevrolet) with Grammy Award-winning artists Michael W. Smith and Third Day. Journey to the TopLucado was born in 1955 in San Angelo, Texas, and raised in Andrews, Texas, the youngest of four children. His father was an Exxon oil field mechanic who, Lucado remembers, always smelled of grease cleaner. "It makes it easy for me to see a God who is loving and kind--because my dad was," he says. His mother was a nurse who grew up working in the cotton fields. Lucado went through a period of rebellion against his parents' values and their God during his teens and into college. But it wasn't long before he found himself drawn back to his roots, back to God. He married, spent time serving as a missionary in Brazil, and returned to the States, where he began working as a church minister and writing on the side. Secret to Success From all accounts, Max Lucado is not a man consumed by sales, awards, and achievements. He often turns down media interviews since they impede on family and ministry commitments. He spends the bulk of his week serving as senior minister at Oak Hills Church in San Antonio, Texas. And he is truly surprised by his own success--more impressed by his one-in-a-million wife and three amazing daughters than by his successful writing career.

For these six books I chose to give them away to some of the people that I go to church with.
I plan to give the Pocket Prayers for Graduates to Austin Keith he will graduating high school this year.
Wendy Hollowell is a teacher and she loves the Lord so much so I thought the Pocket Prayers for Teachers would be perfect for her.
Well now this one was not even hard for me to pick, I picked James Mitchell for the Pocket Prayers for Dads. He is a single dad and he has chosen to bring his son to church and raise him the way he should be raised.
I chose Michelle Gray to be the recipient of the Pocket Prayers for moms, she is a young mom with a baby boy and she has him at church every chance she gets.
Last but not least I chose Patti Williamson to get the Pocket Prayers for Friends. She is more than a pastors wife she is a prayer warrior in my life and a friend.
I hope and pray that each of these books touches each person in a profound way.
I was given copies of all six books by the publishers and asked to pass them on.

Here are some dates to keep in mind.
Posted by Mary Jackson at 5:38 PM