The Atonement By Beverly Lewis 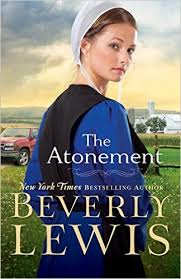 A Must-Have Novel from the #1 Name in Amish FictionThe mistakes of the past haunt Lucy Flaud, who years ago stopped attending the activities for courting-age young people in her hometown of Bird-in-Hand. Now twenty-five and solidly past the age of Amish courtship, Lucy has given up any hope of marriage, instead focusing her efforts on volunteering in both the Plain and fancy communities of Lancaster County. Yet no matter how hard Lucy strives, she feels uncertain that she'll ever find redemption.Dale Wyeth has a deep mistrust of modern-day "advances" and the dependency they create. The young Englisher's interest in living off the grid is fueled further when he meets Christian Flaud, Lucy's father. Dale appreciates the self-sufficient ways of the Old Order Amish, and Christian invites him to learn more about them by staying at the family farm.As Christian and Dale grow closer, developing a father-son rapport, Lucy begins to question what Dale's being there might mean for her. Could God be testing her? Or is it possible that even the most unworthy heart--and two people from very different walks of life--can somehow find a new beginning?

I've had my nose in a book, for as long as I remember. When I was about 9 years old, I started writing my own stories. By sixth grade, I'd hand-written a 66-page semi-autobiographical book titled, "She Shall Have Music."After I was married and our three children were in middle school, I began submitting articles and short fiction to various magazines.My first book (Holly's First Love) was published in May 1993, the start of a 14-book series for pre-teen girls. Soon after, my first chapter book was published for 7-10-year-old readers ("Big Bad Beans") which later became part of my 24-book series, The Cul-de-Sac Kids. I wrote another long-running series for girls, titled "SummerHill Secrets," which was set very close to Neffsville, PA, where I grew up--near the heart of Amish country.But it was the story of my grandmother Ada Buchwalter's shunning by her ultra-strict father and subsequently her old order Mennonite community that nudged me toward writing adult fiction. THE SHUNNING was published in 1997 by Bethany House Publishers, and along with its sequels, has touched a nerve in millions of readers intrigued by the Plain tradition of Lancaster County, PA. The Hallmark Movie Channel will air the movie, "Beverly Lewis's The Confession" on January 19, 2013--the sequel to "The Shunning" movie.My passion for Amish-related stories continues to keep me up at night, and I'm presently editing the 2nd book (The Bridesmaid) in my new series: "Home to Hickory Hollow," due out September 11, 2012.When I'm between writing deadlines, I enjoy hiking in the Rocky Mountains with my husband. Cooking from scratch, playing Mozart at the piano, and making family memory albums, as well as traveling to meet my devoted readers during book tours, are some of my very favorite things. I also adore reading biographies and memoirs, as well as classic literature.


I fell in love with this story. Such secrets  and true, real , character's. It was so easy to fall into the book.
I never saw the ending coming. It is not a predictable Amish book.
New fresh story from Lewis. Easy and fun read.
Lucy was running from the Lord and she was trying to make things right by works and her selflessness was so refreshing.
I have to say Lucy was my favorite character.
I gave this book 4 stars and I enjoyed it so much. I recommend it.
I was given a copy of this book by the publisher for my honest review.
Posted by Mary Jackson at 9:48 AM