A Matter Of Life And Death By Phillip Margolin 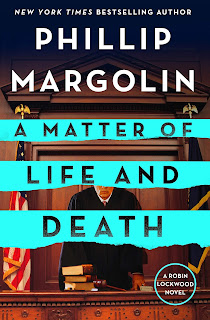 Joe Lattimore, homeless and trying desperately to provide for his young family, agrees to fight in a no-holds-barred illegal bout, only to have his opponent die. Lattimore now finds himself at the mercy of the fight's organizers who blackmail him into burglarizing a house. However, when he breaks in, he finds a murdered woman on the floor and the police have received an anonymous tip naming him the murderer.
Robin Lockwood, an increasingly prominent young attorney and former MMA fighter, agrees to take on his defense. But the case is seemingly airtight―the murdered woman's husband, Judge Anthony Carasco, has an alibi and Lattimore's fingerprints are discovered at the scene. But everything about the case is too easy, too pat, and Lockwood is convinced that her client has been framed. The only problem is that she has no way of proving it and since this is a death case, if she fails then another innocent will die.
Pick up your copy here...
Amazon.com: A Matter of Life and Death: A Robin Lockwood Novel (Robin Lockwood, 4) (9781250258427): Margolin, Phillip: Books 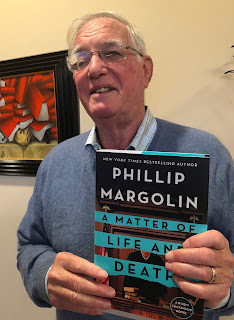 I grew up in New York City and Levittown, New York. In 1965, I graduated from The American University in Washington, D.C. with a Bachelor’s Degree in Government. From 1965 to 1967, I was a Peace Corps volunteer in Liberia, West Africa. In 1970, I graduated from New York University School of Law. During my last two years in law school I went at night and worked my way through by teaching junior high school in the South Bronx in New York City. My first job after law school was a clerkship with Herbert M. Schwab, the Chief Judge of the Oregon Court of Appeals. From 1972 until 1996, I was in private practice specializing in criminal defense at the trial and appellate levels. As an appellate attorney I have appeared before the United States Supreme Court, the United States Court of Appeals for the Ninth Circuit, the Oregon Supreme Court and the Oregon Court of Appeals. As a trial attorney, I handled all sorts of criminal cases in state and federal court and I have represented approximately 30 people charged with homicide, including several who have faced the death penalty. I was the first Oregon attorney to use the Battered Women’s Syndrome to defend a battered woman accused of murdering her spouse.
My Thoughts...
I am such a fan of this series. I love Robin and if I was in trouble she would be the bada** to get me a out of trouble.
I love that the mystery in A Matter Of Life and Death was one that I did not see coming. I had no idea who did it.
You are going to love book four, I hope this is not the final book in the Robin Lockwood series because each book just gets better and better.
This book can be read as a stand alone but you are going to love the whole series.
Margolin is a top 10 writer I did not see that ending coming.
The Mary Reader received this book from the publisher for review. A favorable review was not required and all views expressed are our own.
Posted by Mary Jackson at 3:01 AM