In Light of the Summit By Jamie McGillen 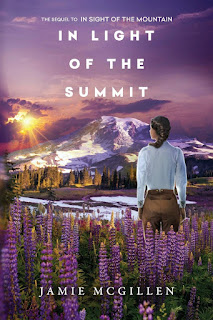 The much-anticipated sequel to In Sight of the Mountain!

After Anna Gallagher’s first climb on Mt. Rainier, she faces a new challenge—enduring the ridicule and threats that come with breaking tradition. In 1890, being a young female mountaineer makes polite society uncomfortable, even angry. But despite the threats and inherent risk, she still has plans for another climb, even if it jeopardizes her family bookstore, and puts her in more danger than she ever imagined.

Emily Watson has always been close with the Gallagher family. As a young girl she dreamed of a wealthy husband, a fine house, and a future in Seattle society and now she finally has it. Her desires couldn’t be more different than Anna’s, but she’s confronted with her own invisible mountain to climb when she’s suddenly poverty-stricken. She must decide what matters most, and whether true love is worth waiting for.

In Light of the Summit is a captivating story of ambition, heartbreak, and redemption. It’s a tale of two childhood friends navigating womanhood in the late 19th century, with as much grace as they can muster, while still figuring out how to be true to themselves.
Pick up your copy here...
Amazon.com: In Light of the Summit (The Rainier) (9781733423953): McGillen, Jamie: Books

Jamie McGillen lives in the shadow of Mount Rainier, and no matter how many times she moves away, it draws her home. Everything about large evergreen trees delights her, except how poky they are, and the sap. Her poems and essays have been published in numerous literary journals, and she teaches English Composition at Highline College.
My Thoughts...
In this sequel to In Sight of the Mountain we get to return to Seattle and I was so excited to read the next book in the series.
This one has dual narrative and I love following these two.
I again was left wanting more. McGillen has out done herself with this series.
4 stars and I recommend the series.
The Mary Reader received this book from the publisher for review. A favorable review was not required and all views expressed are our own.
Posted by Mary Jackson at 3:03 AM