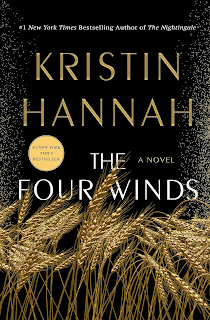 From the number-one bestselling author of The Nightingale and The Great Alone comes a powerful American epic about love and heroism and hope, set during the Great Depression, a time when the country was in crisis and at war with itself, when millions were out of work and even the land seemed to have turned against them.“My land tells its story if you listen. The story of our family.”Texas, 1921. A time of abundance. The Great War is over, the bounty of the land is plentiful, and America is on the brink of a new and optimistic era. But for Elsa Wolcott, deemed too old to marry in a time when marriage is a woman’s only option, the future seems bleak. Until the night she meets Rafe Martinelli and decides to change the direction of her life. With her reputation in ruin, there is only one respectable choice: marriage to a man she barely knows.By 1934, the world has changed; millions are out of work and drought has devastated the Great Plains. Farmers are fighting to keep their land and their livelihoods as crops fail and water dries up and the earth cracks open. Dust storms roll relentlessly across the plains. Everything on the Martinelli farm is dying, including Elsa’s tenuous marriage; each day is a desperate battle against nature and a fight to keep her children alive.In this uncertain and perilous time, Elsa―like so many of her neighbors―must make an agonizing choice: fight for the land she loves or leave it behind and go west, to California, in search of a better life for her family.
The Four Winds is a rich, sweeping novel that stunningly brings to life the Great Depression and the people who lived through it―the harsh realities that divided us as a nation and the enduring battle between the haves and the have-nots. A testament to hope, resilience, and the strength of the human spirit to survive adversity, The Four Winds is an indelible portrait of America and the American dream, as seen through the eyes of one indomitable woman whose courage and sacrifice will come to define a generation.
Pick up your copy here...
The Four Winds: A Novel: Hannah, Kristin: 9781250178602: Amazon.com: Books

Kristin Hannah is the award-winning and bestselling author of more than 20 novels including the international blockbuster, The Nightingale, which was named Goodreads Best Historical fiction novel for 2015 and won the coveted People's Choice award for best fiction in the same year. Additionally, it was named a Best Book of the Year by Amazon, iTunes, Buzzfeed, the Wall Street Journal, Paste, and The Week.Kristin's newest new release, The Great Alone, was published on February 6, 2018 (St. Martin's Press) and became an instant New York Times #1 bestseller. The novel, an epic love story and intimate family drama set in Alaska in the turbulent 1970's is a daring, stay-up-all-night story about love and loss, the fight for survival and the wildness that lives in both nature and man. Like The Nightingale, The Great Alone was voted the best Historical novel of the year by Goodreads readers.The Nightingale is currently in production at Tri Star, with director Melanie Laurent and Dakota and Elle Fanning to star. Tri Star has also optioned The Great Alone and is in development.Kristin's upcoming novel, The Four Winds, set during the Great Depression, will be published on February 9, 2021.www.kristinhannah.com
My Thoughts...
I don't even have words for this book. It was a hard to read. I could not put it down. BOTM has the best books. Elsa is my hero. I just want to share this book with everyone so bad. It was a heart tugging read and Hannah did it so well.5 stars and such a fantastic read.
The Mary Reader received this book from the publisher for review. A favorable review was not required and all views expressed are our own.
Posted by Mary Jackson at 4:53 AM