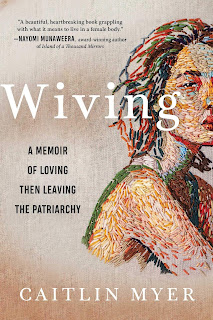 At thirty-six years old, Caitlin Myer is ready to start a family with her husband. She has left behind the restrictive confines of her Mormon upbringing and early sexual trauma and believes she is now living her happily ever after . . . when her body betrays her. In a single week, she suffers the twin losses of a hysterectomy and the death of her mother, and she is jolted into a terrible awakening that forces her to reckon with her past—and future. This is the story of one woman’s lifelong combat with a culture—her “escape” from religion at age twenty, only to find herself similarly entrapped in the gender conventions of the secular culture at large, conventions that teach girls and women to shape themselves to please men, to become good wives and mothers. The biblical characters Yael and Judith, wives who became assassins, become her totems as she evolves from wifely submission to warrior independence.
An electric debut that loudly redefines our notions of womanhood, Wiving grapples with the intersections of religion and sex, trauma and love, sickness and mental illness, and a woman’s harrowing enlightenment. Building on the literary tradition of difficult women who struggle to be heard, Wiving introduces an urgent, striking voice to the scene of contemporary women’s writing at a time when we must explode old myths and build new stories in their place.
Pick up your copy here...
Wiving: A Memoir of Loving Then Leaving the Patriarchy: Myer, Caitlin: 9781950691470: Amazon.com: Books

In 2011, Myer attended the Disquiet International Literary Program in Lisbon on a scholarship. While there, she hosted a Portuguese Artists Colony reading in the historic Grémio Literário, 150-year-old literary club that did not admit women until the Carnation Revolution in 1974. In the same year, she participated in the Squaw Valley Writers Workshop with a George Pascoe Miller Scholarship. In the spring of 2012, Myer completed a residency at MacDowell Colony, where she was recipient of a fellowship from the Rona Jaffe Foundation. Her memoir/essays “Positive I Don't Have a Uterus” and “Unforgettable: Becoming an Amnesiac’s Memory” were published in The Butter and Electric Literature, respectively. Her short story “Everything a Woman Should Have” appeared in Cultural Weekly, the poem “Bus Story” in No Tokens, and the story “God Time” in Joyland. Other short stories, poems, and essays have been published in literary magazines, online journals and anthologies.

She has appeared in storytelling series such as Porchlight and The Moth, and was featured on NPR's The Moth Radio Hour with her real-life story, “Near Mrs.” She has also been featured in podcasts, including Nocturne. These performances have won her fans around the world, from India to Portugal to New Orleans.

For seven years, Myer has lived out of a suitcase, but she now has a lease on a 400-year-old apartment in the north of Portugal. At least once a week, she climbs the hill to what was once a 12th century Augustinian monastery, and writes.

My Thoughts...
I love a good memoir, its always neat reading about other peoples lives and what others are going through and how they are handling it.
So this was a treat and a good getaway from fiction for a few hours.
My heart aches for this women being homeless for 7 years had to be hard. I am so happy that her life took a turn for the better and she is doing well and writing now.
I gave this book 4 stars.
The Mary Reader received this book from the publisher for review. A favorable review was not required and all views expressed are our own.
Posted by Mary Jackson at 4:07 AM