Nowhere to Lay My Head By Craig Daliessio 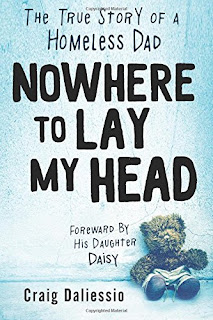 Every father makes sacrifices for his child. Craig Daliessio's sacrifice was homelessness. Caught in the economic collapse of 2008, Craig lost his career and his home. But he refused to lose his fatherhood. His daughter was in a dangerous situation because of her mom's new husband, and Craig refused to leave her without his protection. The only way he could remain active in her life, and give her the safety that a dad provides, was to live in his car as he worked tirelessly to rebuild his life. Craig made this choice willingly and it began a six year journey through the darkest days of his life. Along the way, he completed his degree, graduating while still homeless. He never missed a birthday or a recital for his daughter. Ultimately, he began a new career and he and Daisy now live in Lynchburg, Va, where he is a Business Relationships Manager for Liberty University, and his daughter is a sophomore...and safe from the nightmare she was enduring. It's an amazing, inspiring, gripping story of loss, faith, endurance, and the love of a dad for his daughter. Radio host Dave Ramsey calls this book "Riveting" and says: "You will not be able to put it down!"

My Review..
Wow, is all I can say. When I was asked to read this book and give my thoughts I had no idea what I was getting into. This was an emotional read and a very raw read.
I wanted to hunt Craig down and take him in. I found him to be a selfless man. A man that could be trusted and I worried about him. We could all learn  a few things from Craig and his story.
My hope is that you will order a copy of this and really sit down and think really hard about our homeless people. Pray for them and learn from them.
I gave this book 4 stars. I recommend picking up a copy.
I received this book from the Author for review. A favorable review was not required and all views expressed are my own.
Posted by Mary Jackson at 6:40 AM