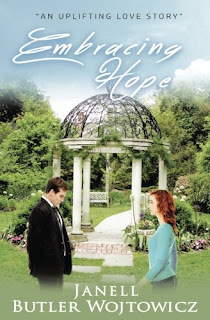 Christian college dean Drew McKinley mourns his dead wife and still wears his wedding ring. He stumbles on a desperate journey to understand God’s motives for her tragic death. Crossing his perilous path is Allison, a graduate student and new employee in the dean’s office. Even as she deals with financial hardships, she recognizes Drew’s unresolved grief from her own loss. Putting up a roadblock is Chris Whitney, the handsome but egotistical student senate president. He carries the secret burden of a dysfunctional family and a below-the-surface temper. The road Drew must navigate is fraught with career upheaval, a reawakening heart, substance and domestic abuse, a violent assault, and the struggle for forgiveness and restoration. Will Drew finish his journey to embrace the hope God offers, the love Allison shares, and the guidance Chris needs, or will he turn his back on all three with catastrophic consequences?


What is the most important thing  you hope readers will take away from reading your book?
Hope is one of what I call the Big Three in 1 Corinthians 13, yet it’s often overlooked by the virtues of love and faith. So, what is hope? It is wishful thinking and sitting around waiting for things to change for the better? Or is hope something more tangible—something you need to take steps to achieve; a plan of action?
The hero in “Embracing Hope”, Drew, has a strong dislike for Jeremiah 29:11: “For I know the plans I have for you,” declares the Lord, “plans to prosper you and not to harm you, plans to give you hope and a future.” His plans were crushed when his wife was killed; he lost all hope. Then he begins to understand that hope takes a plan—action. He realizes he needs to step out in faith and love. Fearful and reluctant at first, Drew takes steps to find hope. Those steps include mentoring, a gritty missions experience, bravery in a crisis, and forgiveness that seem impossible. He had to look beyond himself. The result was he gave tangible hope to others, he discovered what God wanted him to do with his life, and he found hope through the love of a strong woman. My goal is that the reader will put action to their desire for hope, whether it’s dealing with a job loss, financial problems, broken relationships, illness, tragedy, loss.
How does your faith play in your writing?
I’m a born-again Christian, so I couldn’t write a novel without injecting the gospel; it’s in my spiritual DNA. “Embracing Hope” has a solid Christian message of forgiveness, redemption, and renewal. The message came naturally as I wrote it; I didn’t have to force it. The story uses Scripture, not in sermon or expository situations, but in conversation, prayers and contemplation—how we can use it in our daily lives. Two other manuscripts I’ve been working on also have a strong message of Christian faith, forgiveness and salvation. After 10 years in secular journalism, the sensibility to write faith-based people stories came when I worked in Christian environments (higher education, inner-city nonprofit) for 14 years. Bit and pieces of those experiences are found in “Embracing Hope.”
What is your favorite Bible verse and why?
The entire chapter of Psalms 100, especially verse 5: “For the Lord is good and His love endures forever. His faithfulness continues throughout all generations.”
What sparked your decision to journey down the path of writing?
I was born with it. It might also be heredity as my uncle, a pastor and theologian, wrote many Bible expository books. I was one of those kids who loved writing the cheesy and dreaded “What I did on my summer vacation.” Our family vacations were never adventurous, such as Disneyland or RVing across the country. I grew up on an Iowa farm, so I wrote about observations and activities on the farm, annual trips to see my cousins in the Twin Cities, day trips to Iowa tourist spots, etc. It’s fair to say I probably “fluffed” the writing a bit. J
Why did you choose this genre?
My writing career in journalism and public relations and most of my recreational reading has been nonfiction (history, biographies). I read some novels when I was younger, mostly Christian like “Christy.” A love for classic novels, such as “Sense and Sensibility” and “Wuthering Heights”, came in high school literature classes.
I never set out to write a novel, let alone a Christian romance. I credit (or blame?) a BBC version of “Jane Eyre.” One evening in 2007, I watched the movie and that night I dreamed the beginning, pivotal scene in the middle, and ending of what became “Embracing Hope.” I began writing compulsively the next day as soon as I got home from work. I consider “Jane Eyre” a dark romance, and in some ways Drew and Allison are the 21st century version. Drew is a brooding Mr. Rochester whose wife isn’t insane hidden away in the turret of a castle, she’s just dead. While Allison isn’t a suffering waif, she’s struggled with her own share of life’s hardships.
What are your hobbies other than writing?
I’m an avid walker. I tune my radio to Classic Country (a remnant from my rural childhood) and head for the regional park across the street from my home. When I was working on “Embracing Hope” I would dialogue scenes, more as the backstory to get a feel for the characters and plot. This was BEFORE technology enabled people to talk on the phone as they walked. People must have thought I was crazy talking to myself.
If you were granted one wish what would you wish for?
As impossible as it sounds, that this nation would be united politically, racially, culturally and spiritually. I cling to “with God all things are possible (Matthew 19:26), and “Blessed is the nation whose God is the Lord” (Psalm 33:12).
If you could go anywhere in the world where would it be and why?
Jane Austen country! I’ve read most of her books and biographies—over and over—and watched most of the on-location movies—over and over. Seeing the area would bring her and the stories to life. What accomplishment are you most proud of?
Never giving up on getting “Embracing Hope” published. It took nine years, and there were times when I put it on the shelf thinking it would be found and published after my death. But the cheerleading of two friends, Dale and Wendi, kept me going. The sudden death of Dale in 2015 inspired me to seriously pursue a publisher. I think he had a role in that from his heavenly residence.
Tell readers how to keep up with you?
·       Amazon - https://www.amazon.com/Embracing-Hope-Janell-Butler-Wojtowicz/dp/1988422043/ref=sr_1_1?s=books&ie=UTF8&qid=1479298376&sr=1-1&keywords=janell+butler
·       Twitter - @janellwoj
·       Blog - http://janellwoj.wordpress.com